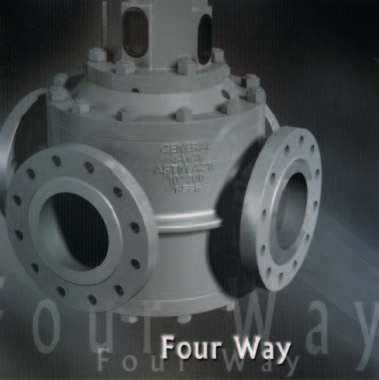 The General Valve Four-Way Diverter Valve does not rely on line pressure or external hydraulic pressure for positive sealing.
The seating elements, or slips, move perpendicularly against the face of the ports.
The seals themselves are highly resilient elastomers which are either bonded or mechanically retained in the slips.
Retraction of the slips, away from the body prior to cycling prevents friction and abrasion which can damage seals.
There is never any sliding or rubbing of the seals against the valve body or ports.
Metal-to-Metal secondary seating prevents over compression of the resilient primary seal.

Fast and easy operation by hand or automatically with electric motor or hydraulic actuators is possible. Lower cycling torque permits use of smaller and less expensive power actuators.

This item is available as an option. When sold as a motor ADAPTED valve be sure to select ONLY self-locking actuators.

Because the seating segments are mounted via dovetailed connections to the plug, they may be removed from the top or the bottom and examined without having to take the valve from the line or disturb the actuator. This added flexibility allows the valve to be installed upside down for easy access to actuator and slips.

The gauge automatically indicates seal condition each time the valve is seated during proving, even in low differential operating conditions.

The pressure gauge connects to the body cavity between the valve slips. As the slips expand in the diverted position, the resilient seals contact the valve body, trapping the fluid between them. Further expansion of the slips during valve seating compresses the seals further. The resulting increase in volumetric space between the slips, without an increase in the amount of fluid, will cause a drop in pressure.

Any leakage through either seal permits additional fluid to enter the body cavity, causing an immediate increase in cavity pressure back to line pressure. Even the most minimal fluid leak will register on the gauge immediately.

A pressure switch may be used to supplement the gauge method as an option.

Seated in “R/L-Close – CCW” Position  Valve is seated. Flow streams completely separated. Pressure gauge in body would indicate reduced pressure. As the valve is unseated the plug is raised and both slips are retracted.  Plug and slips begin to turn. Slips and resilient seals are fully retracted away from the body. Pressure gauge would indicate line pressure.

Neutral - Fully Unseated Position At this point in the cycle, the hole through the plug allows the flow to pass directly from the inlet port to the outlet port. Both slips and plug are designed so that the flow is not appreciably restricted when cycling. Pressure gauge would indicate line pressure.

Seated in “L/R-Open – CW” Position Plug and slips in fully rotated position. Plug moves down, expanding the slips against the body. Flow streams are completely separated. As the seals trap fluid between them and volumetric space increases the body pressure gauge would once again indicate less than line pressure.

FOUR WAY DIVERTER VALVE HYDRAULIC ACTUATOR HGO
The General Valve Four-Way Diverter Valve can be supplied with Hydraulically Powered Gear Operators.
The General Valve Hydraulic Gear Operator (HGO) is custom designed and engineered to maximize reliability while minimizing installation and maintenance costs.
All actuating components are contained in a rugged, compact, explosion-proof module designed to withstand rough handling and hostile environments.
The system operates efficiently and quietly and can be installed or retrofitted on any existing gear-operated Four-Way Diverter Valve.
The Self-Locking HGO can operate at speeds of up to 900 rpm.